A useful trick with hosting servers via ADSL connections at home is to provide something called NAT loopback. In this text, I will be giving an example setup using OpenBSD’s pf tool. Imagine the following:

You have a development server hosted via an ADSL line, behind a NAT router/firewall. You would like this development server to be visible to others via the Internet, and you have assigned a name in DNS which maps to one of the externally visible IP addressed assigned to you via your ADSL hosting company. You then set up a virtual host on the development webserver so that it responds to the DNS name you’ve assigned it. 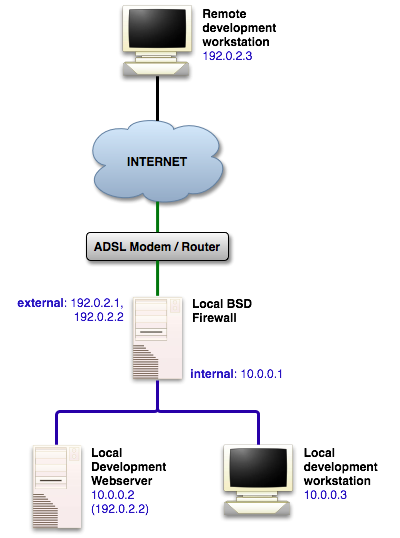 A problem arises when you need to talk to the machine locally on your network, using the DNS name you’ve given it. Without any special rules, this will not work due to the following series of events:

What is required within the pf rules is a redirect that takes traffic bound for the external IP address of the webserver, and rewrites the source address, so the reply gets sent back to the NAT box, and in turn gets rewritten and redirected back to the originating host.

More information can be found in the pf FAQ. Thanks go to Jasper Wallace for originally writing the pf rules for the setup in our flat.