Certain channels exist on Freeview which are nothing but timeshifted content from another channel. By convention, these have been called plus 1 channels, so ITV2+1 is a channel devoted to showing exactly what is on ITV2, delayed by one hour….except it doesn’t. 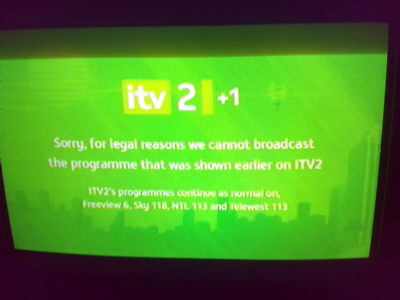 The image above was shown last night between roughly 10 and 12pm, during the time when ITV2 was showing Beverly Hills Cop II. Now I would think this is because ITV2 has paid for a particular number of showings during a given time period, and technically speaking, ITV2+1 broadcasting it would constitute as another showing, and that would push it over that figure. This might also be related to whether or not the content had been shown on ITV1 before ITV2, as is often the case.

This is, of course, a ridiculous waste of precious terrestrial bandwidth, and I wonder just how profitable it is for these +1 channels to be maintained. The usual way people would arrive at watching content on a +1 channel is if they’ve seen something on the non-timeshifted channel, and would like to see it from the beginning. This means the programme would have to be at least 1 hour long to begin with, and be sufficiently compelling to make people bother to find the +1 version of the channel.

These channels are also rendered useless when the viewer has a set-top box with a hard disk, and the box records the content they are interested in.

Last but not least, why not timeshift ITV1, which appeals to a larger audience? Perhaps there would be even less actual content for an ITV1+1 due to these rights restrictions. It would all depend on how much content is bought, and on what terms. Having said that, ITV1 is billed as “Top viewing”, whereas ITV2 is billed as “Top US shows”, according to the ITV website, which would suggest ITV2 has more bought content.

I also think messages like the one above reduce the amount of trust the viewer has in a +1 channel. If they find something they would like to view from the beginning, but they’ve previously been denied the chance because of those legal reasons, they might not return in the future. This is exacerbated by the fact that no information is given to the viewer to suggest why the content can’t be shown, and it is left to them to puzzle it out.