A chap at Smoke and Mirrors, where I’m doing some Freelance work, is creating a system to bridge between video routers and a web-based status page. Most of the suites within the building are plumbed in via fibre-optic KVM connections, and depending on the schedule, different video processing systems can get presented in different rooms at different times. All it takes is a change on the routers.

Although complex, this enables the most cost-effective use of each system, marrying the functionality needed to the number of physical people required to attend the session for any given day. There is a large variation in price and functionality with certain high-end systems, so you always want to try and get maximal use from the systems you have chosen to invest in.

He’s looking at using one of the boards from the wonderfully named Acme Systems from Rome. The idea is to communicate with the video router via its RS-232 serial interface, and retrieve an ASCII representation of the current router configuration. It’s a fascinating area of software AND hardware as glue. A physical device which will run some bespoke code to bridge information from one system into another. 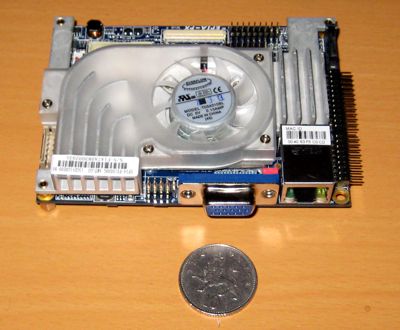 In related news, I’ve also received my Artigo Pico-ITX kit and am now a proud owner of the tiniest system running Linux that I’ve ever seen. It also seems to play happily with the DVB sticks that I had stability issues with on the older Mini-ITX M10k board.

The fan is noticable in a very quiet room, but as soon as there’s anything else to be heard, it’s drowned out, so it’s not quite suitable for your bedroom. They do a fanless system, but it’s half the clock speed. Installing it was done over PXE from my Mac, using the Ubuntu netboot downloads.